New York is a city unlike any other. It's the cultural center of the universe, embodying the best in arts, entertainment, fashion and music. As such, it is also home to many professional artists and musicians. One such musician, a world-renowned pianist (who wishes to remain anonymous) recently contacted us for help. She needed to play her piano for many hours every day at home and was looking to convert a bedroom into an acoustically optimal piano room.

She wanted to make sure that sound wouldn't leak in and out of the room, so that outside noises won't disturb her as she was working, rehearsing or practicing inside, as well as that her playing doesn't disturb her next door neighbors. She also wanted us to improve the room's acoustics so that it sounds as good as it possibly can.

We were happy to take on this project and quickly got to work designing, planning and finally executing. There were several challenges we had to address: Loud noise leaking into the room through a large window, the ceiling had several sprinklers installed we had to work around and a wide sliding door we knew had to be completely removed and replaced. The fact that our client was practicing for many hours, sometimes late into the night, only emphasized how important it was to get it right and ensure sound was not leaking out of the room at all.

Check out the following steps involved in this project and be sure not to miss the before and after video included at the very end!

The first step involved removing any and all furniture, completely stripping the room down and prepping all of the walls and the ceiling. Since the old door was a sliding door, we removed it completely while making sure to protect anything that wasn't removed, like carpeting, electrical outlets, light fixtures, an air conditioner and a window. 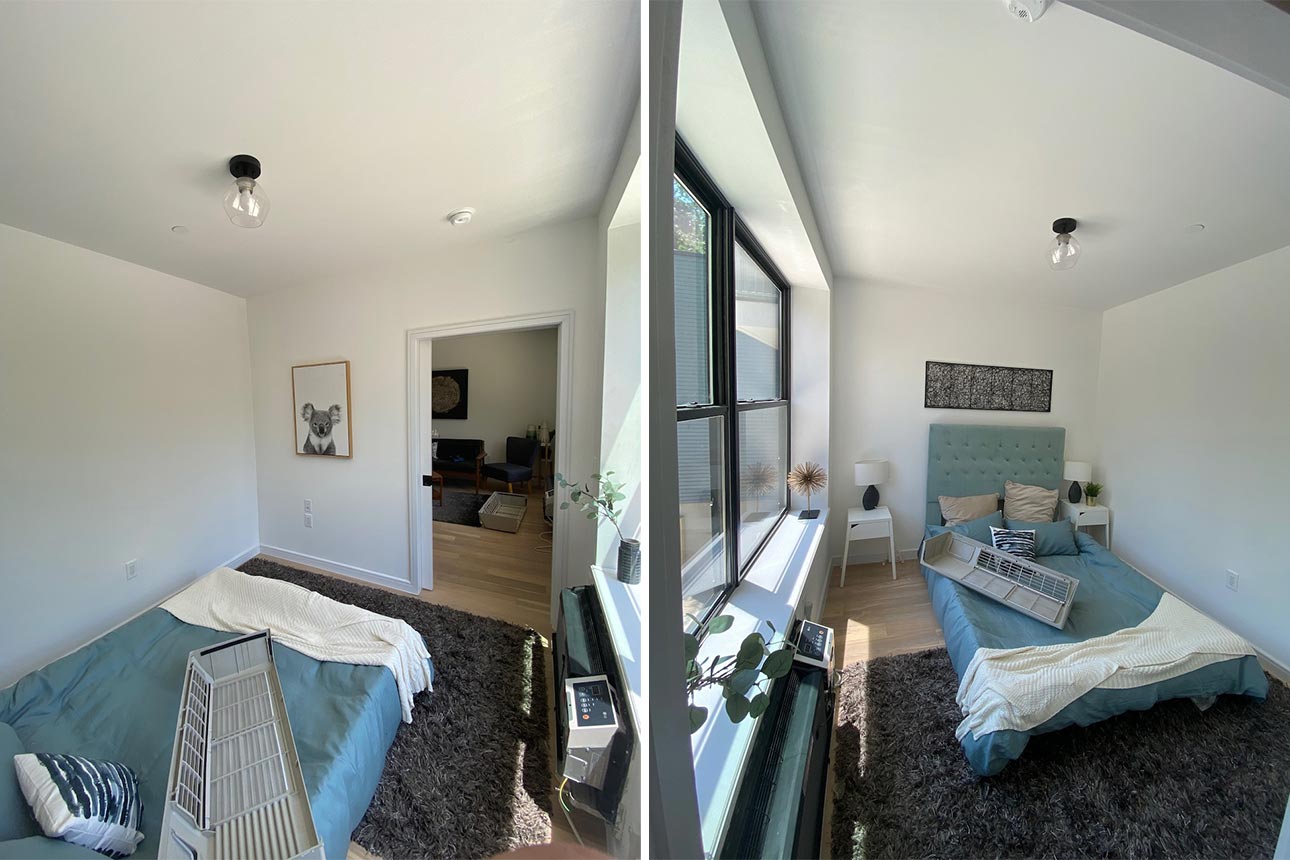 Our solution involved a multi layer approach for the walls, ceiling and floor. We installed a layer of noise-reducing rubber, carefully sealing all seams and ensuring the tightest possible fit. We followed that with a layer of noise-reducing drywall using a special glue that ensures better soundproofing by creating small air bubbles between the layers. It also tightens the entire multi-layer wall structure by stopping the layers from sliding and rubbing against one another. 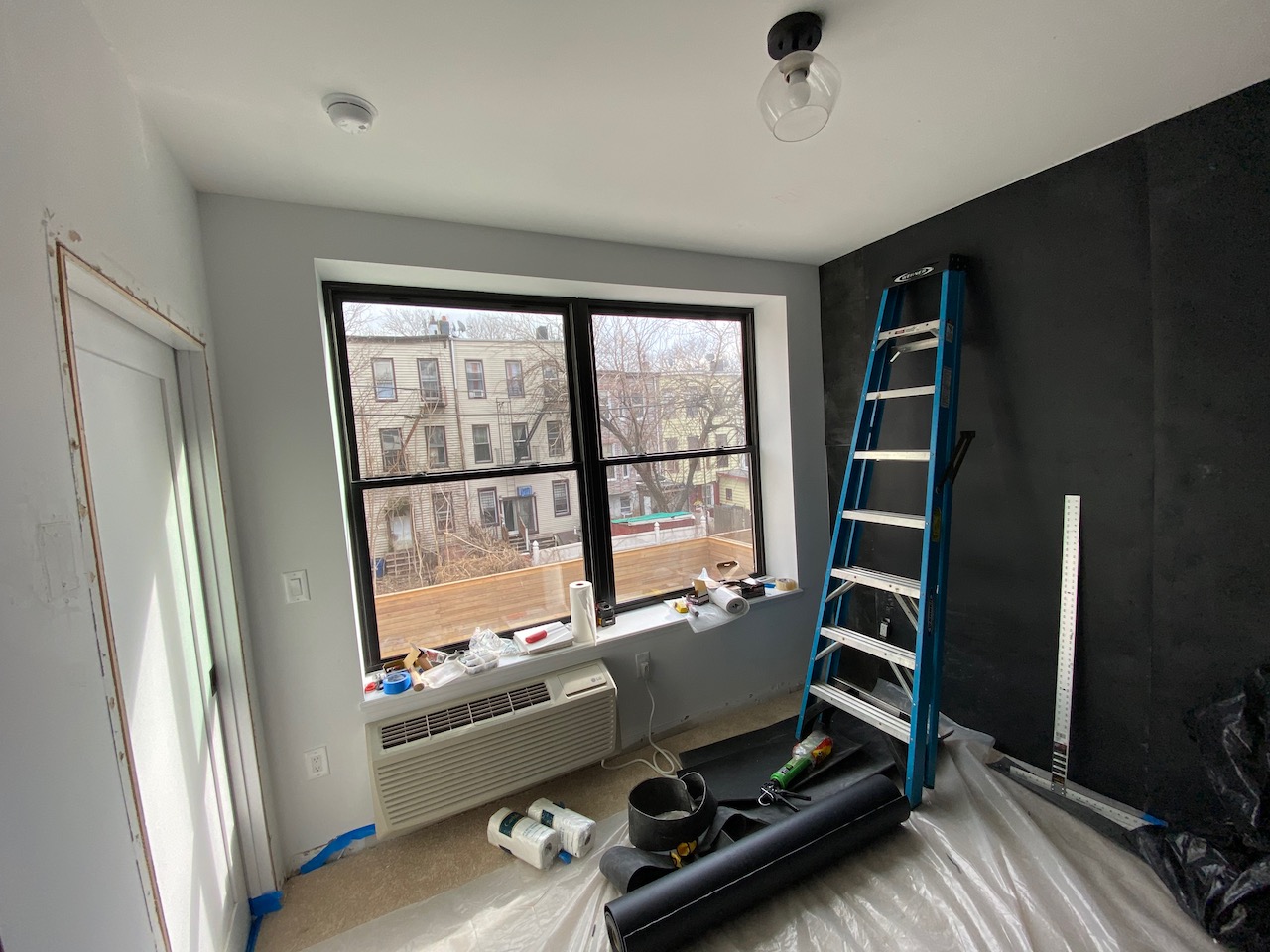 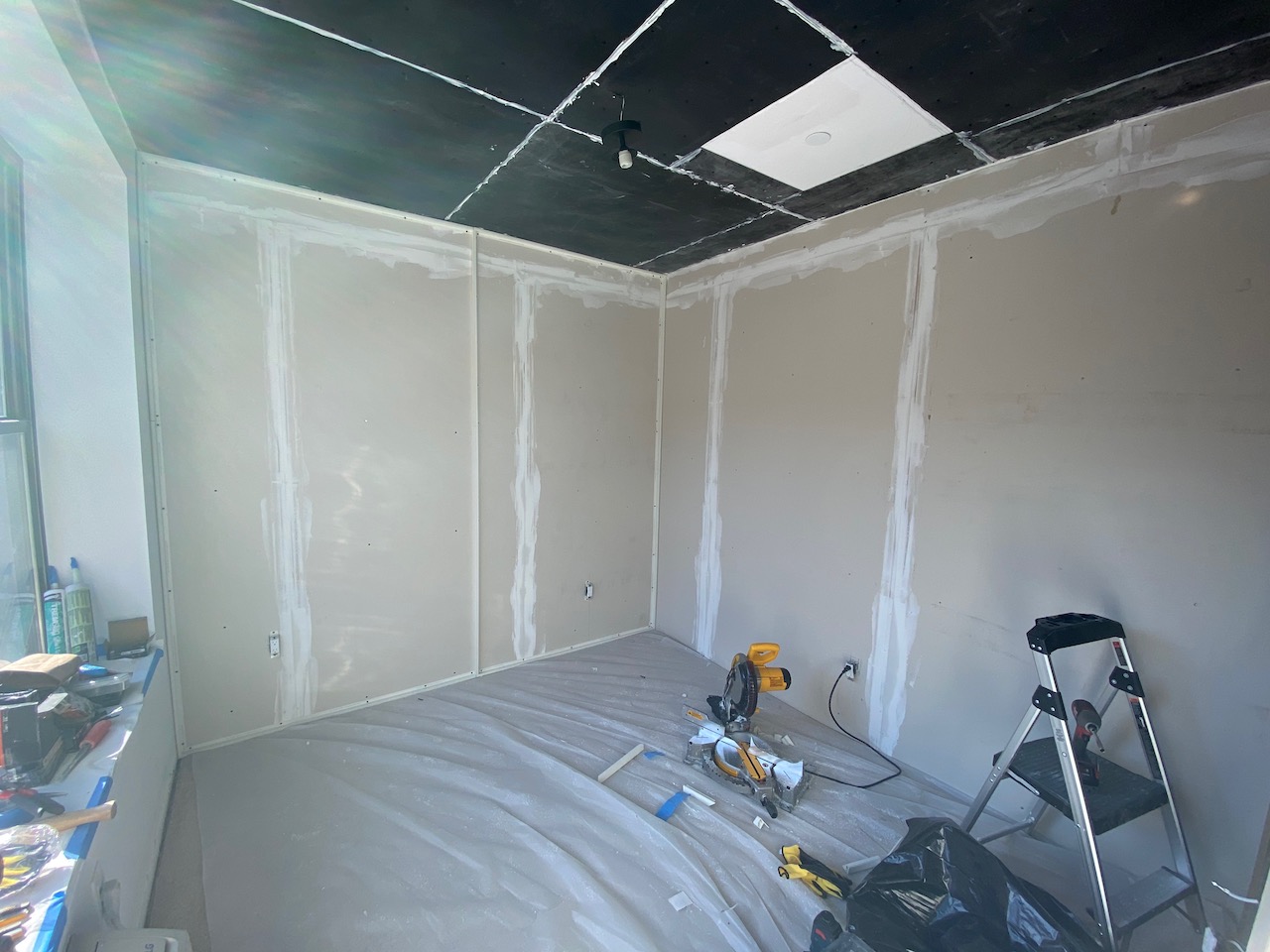 We installed a new dense frame to support a heavy, soundproofing door, and extended the wall to fit the new frame. Finally we installed a fabric track wall, consisting of a PVC frame with acoustic insulation, which is double-wrapped with high-end acoustical fabric. It was strategically placed to best absorb the sounds emanating from the piano. 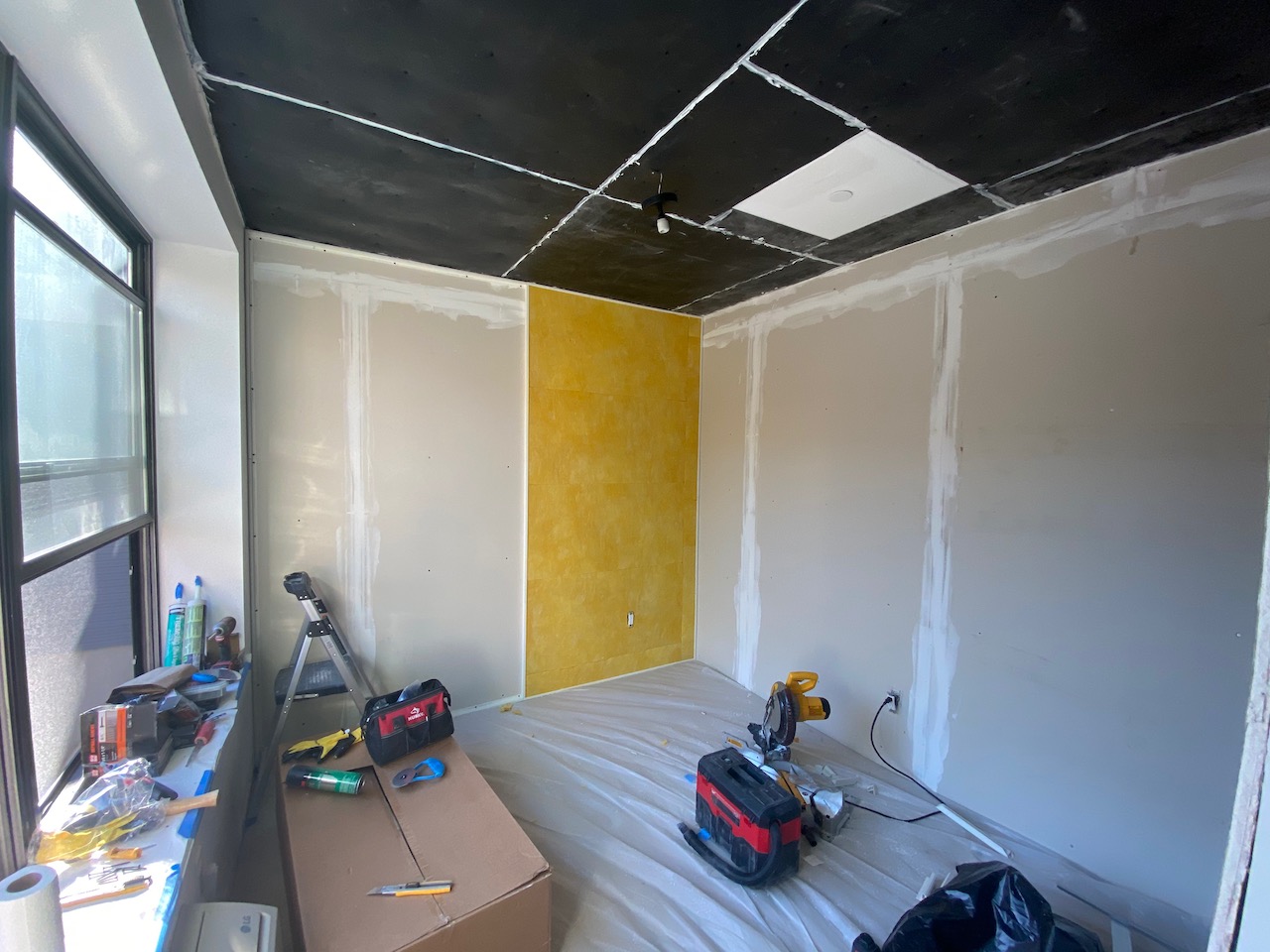 Since the room has a large window we needed a solution that addressed the high level of noise leaking in and out from the outside. We installed a high end, double-sided, thick acoustical curtain that both absorbs sound (reducing echo and improving the interior acoustics of the room) as well as stops sound from going through it. Finally, a custom door was installed, which is designed to confine the sounds emulating from the piano to the inside of the room. 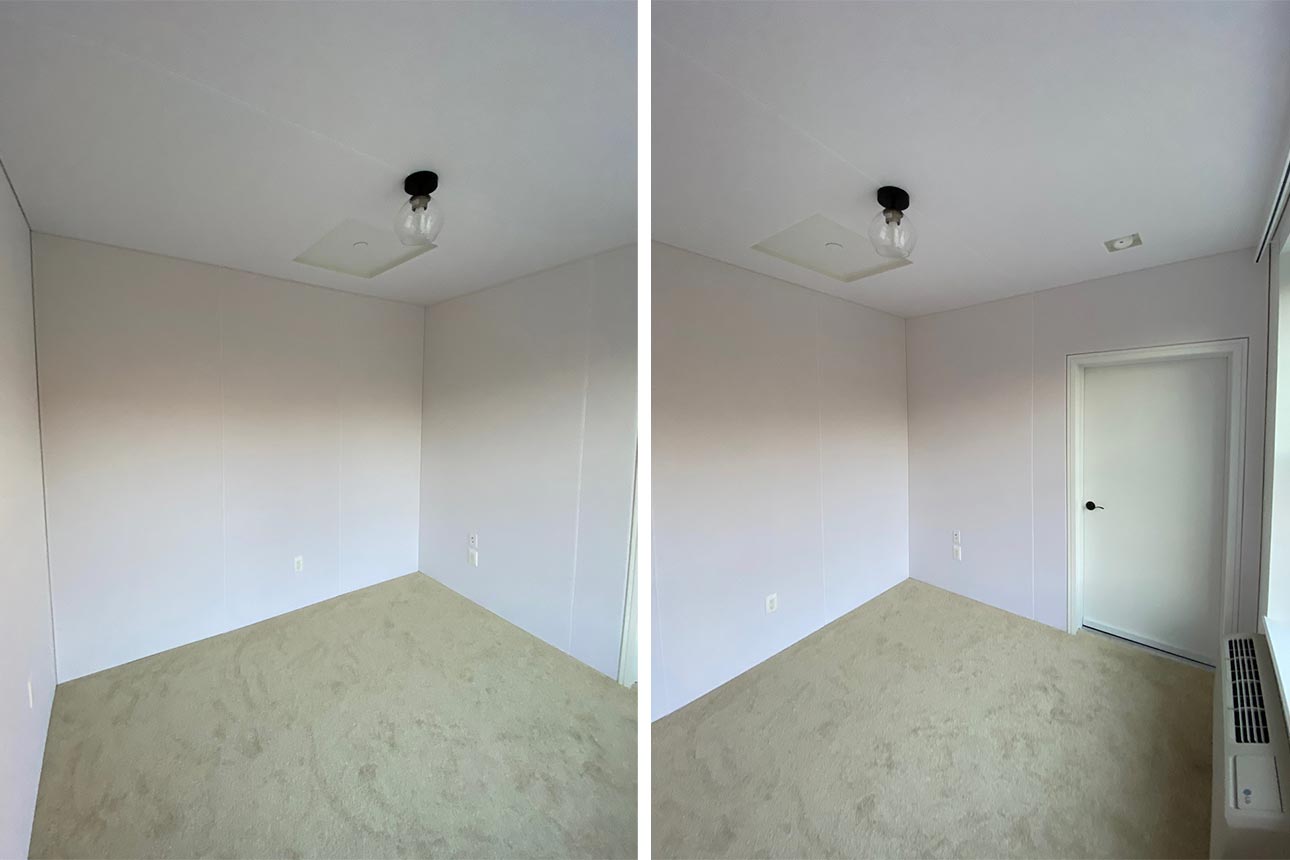 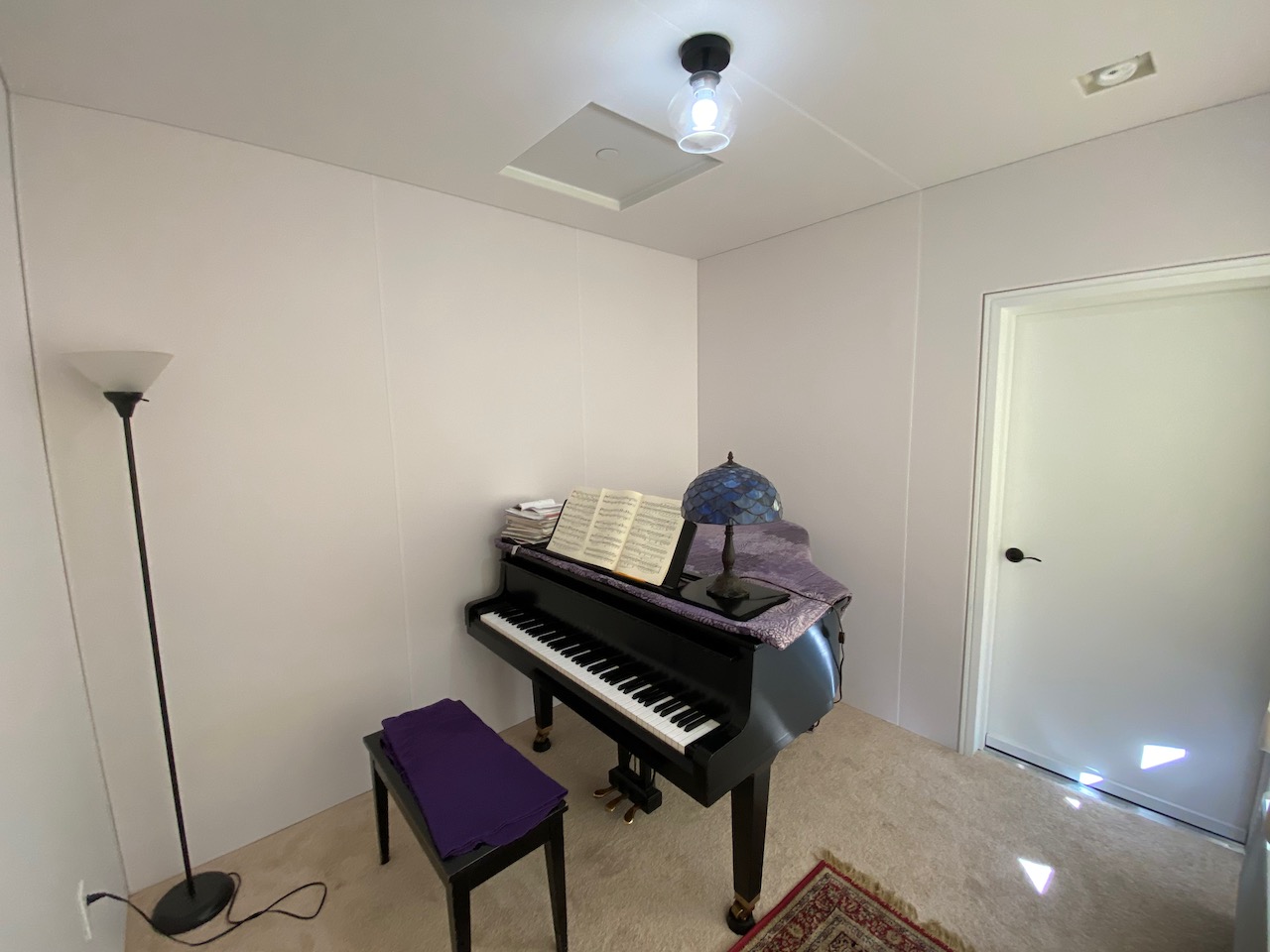 This solution was so effective, our client's neighbors assumed she had moved out. Her place was just that quiet! But don't take our word for it. Check out the before and after video demonstration below!

Check out the soundproofing door in action here:

When you use our services, you can always expect fast, high quality, reliable solutions to all your acoustic needs.

Drop us a line

Get in touch by filling out the form below
(To proceed, check the ‘I’m not a robot’ box)